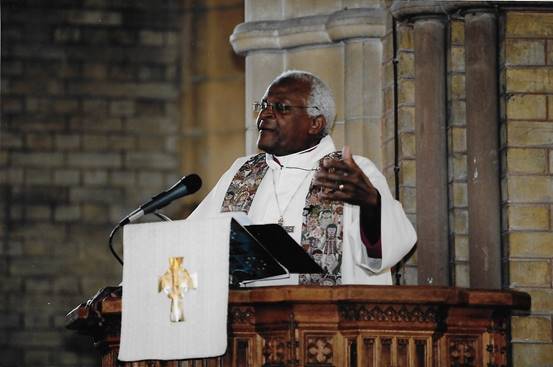 Bishop Christopher shares the press release that was sent out on Sunday 26 December following the sad news of the death of Archbishop Desmond Tutu.

On hearing of the death of Archbishop Desmond Tutu, the Bishop of Southwark, the Rt Revd Christopher Chessun, said, “I was saddened to hear of the death of Archbishop Desmond Tutu and extend sympathy to his family and all who grieve his loss in South Africa and beyond. I give thanks for his life and joyful Christian faith as well as for his close associations with the Diocese of Southwark. He was fearless in naming all injustice wherever it is found, particularly in helping to liberate South Africa from apartheid oppression and for the contribution he made in chairing the Truth and Reconciliation Commission. I pray his lifelong championing of truth and justice will continue to impact on Anglican identity and witness with renewed vigour following his death.”

Archbishop Tutu’s relationship with the Diocese is a long one beginning with his curacy at St Mary’s, Bletchingley in 1965. The Revd Sr Phaedra Pamphilon Green said, “He lived in Clerk’s House and has remained a much loved presence here. After his time as curate at St. Marys he stayed in touch with parishioners and came back to visit us on numerous occasions. He continued to be an inspiration to people in Bletchingley, especially as his work and ministry developed and grew. The parish are very proud that he was a curate here.”

When Phaedra was installed Rector of St Mary’s in June 2017, Archbishop Tutu wrote to her. In his letter he said, “Heartiest congratulations on your appointment as Rector of a wonderful parish with some of the world’s most generous people. Please give them our warmest greetings and tell them we remember fondly our one year as their part time curate. My family and I were really overwhelmed with kindness. We came from three years in an upstairs flat in London with four lively children, to the luxury of a double-storied Clerk’s House and an extensive garden. We were pampered and spoiled.”

During his years working at the Theological Education Fund in Bromley, he was honorary Curate at St Augustine’s Church, Grove Park between 1971 and 1975 where he attended with his family. The Revd Gavin Berriman said, “He was much loved here and lived locally. He came to St Augustine’s whenever he was here. Anyone who was here then, remembers him with love. He returned in 2007 to bless the church wall that was rebuilt.”

Here is a link to Bishop Christopher’s interview with BBC Radio London on 27 December: https://www.bbc.co.uk/sounds/play/p0b7p596 (start at 24 minutes). (link opens in new tab)