The font is designed specifically for St. Anne’s and the consecration took place at the Confirmation Service for twelve church members by the Bishop of Kingston on the 3rd March 2014.

It is inspired by Kempe’s distinctive East Window, which is the first thing you see as you enter the church. The font, to be carved out of white Portland stone, would echo the simple chalice shape, formed by the elegant white tracery of the window. 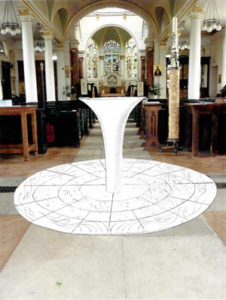 The brilliant white colour, quite unlike any other stone’ * indicates purity and innocence.

It contains tiny marine fossils, from 145 million years ago, which references the beginning of creation. Life began in the waters. Through Baptism we are received into the church and later admitted to Holy Communion.

The font holds water and the Chalice holds wine.

It is a growth shape, shooting upwards like a fountain, strong, full of energy and new life. It is also found in the Palm House, the iconic image of Kew Gardens, where the girders repeat the shape of the palm leaves. This reflects the link with the Royal Botanical Gardens at Kew.