The first Church on this site was built in 1714 on land given by Queen Anne, and largely at her expense. It contained twenty-one pews and an upper gallery. The attractive little brick building was three bays long, entered from west and south, and measured 64 feet by 27 feet. A shallow east projection contained the altar and east window: the steep roof culminated in a clock tower with an octagonal bell turret.

Plans of 1759 show that extensive reorganisation was soon contemplated, although not immediately executed; and a gallery with sixteen pews was removed 11 years later.

The building was greatly enlarged in 1770 at the expense of King George III, to designs by Joshua Kirby. An aisle was added on the north and a five-windowed matching extension along the south side contained a Charity School and Beadle’s Lodging.

The southern extension was taken into the church as an aisle, forty years later in 1810. A gallery added in 1803 was then also extended into this aisle. Outside, the churchyard was enlarged northwards in 1817.

The east end was re-cast in 1822 to accommodate an organ chamber behind the altar. At this period an undated watercolour suggests an open western portico flanked by brick projections containing a staircase and robing rooms.

The west end was in fact extended and remodelled to designs by Sir William Wyatville in 1836/37 at the expense of King William IV, and increased the capacity of the church by 200 seats. This included the present projecting stone portico, and a raised stone bell-tower, with a cupola reminiscent of its predecessor. 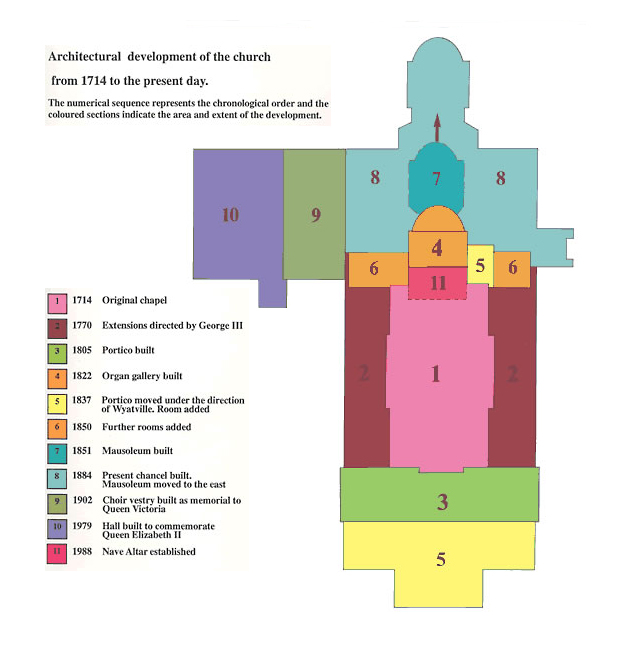 In 1851 on the death of the Duke of Cambridge, a mausoleum with a semi-domed apse was built at the east, as illustrated in a lithograph of 1851. An interior photograph of 1870 shows the altar still West of the organ screen, and a tall south pulpit. 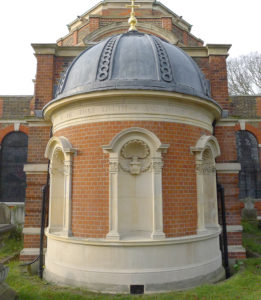 In 1884 however, the east end was extensively re-cast. The present domed chancel was built, and the aisles extended alongside as an organ chamber and a south east chapel. The mausoleum was rebuilt further east. A new south porch was also added and the ceiling of the nave was raised. The architect was W. Stock.

A new choir vestry, vicar’s vestry and toilet were added in 1902 at the north-east of the church, as a memorial to Queen Victoria. The present south chapel and war memorial were created in 1920. In 1930, the Royal remains were removed to Windsor; and the mausoleum remains, as a Chapel of Rest.

In 1978, the present parish hall was built. It is set at right-angles to the church, and incorporates the previous choir vestry. The design echoes the materials and forms of the church.

The building forms the central focus of Kew Green, and is approached from the South side by a car-drive to the west portico. On the three remaining sides it is surrounded by a raised churchyard (approximately 135 feet by 147 feet). The church itself today extends to some 151 feet in length by 54 feet in width, added to which is the modern parish hall. Its seating capacity is approximately 300 persons, together with 80 places in the hall.

An archaeological report was prepared in 2007 as a watching brief for the modernisation of the drainage in the car park area. This report is available for download.

The churchyard has some significant burials and tombs, including important painters Thomas Gainsborough, Johann Zoffany and George Engelheart. Notable figures in the botanic world buried at St Anne’s include William Aiton and Sir William Jackson Hooker.
[ More information on the Graveyard linked here ]